I've been a bit lacking with a post lately.  Work has been crazy, and family life, etc.  But I've been modeling just the same.  I get quite a few people commenting that I must have a lot of time, because I'm always building something, or designing something for Steel Mill Modelers Supply.  But the truth is, I don't watch much TV, and instead chose to spend my 3-4 evenings a week after my little guy is in bed, modeling.  On average, about an hour and a half each of those nights.  It's not hard to put in 6 hours in a week on a project using this math.  TV is a giant waste of time if you're a modeler in my opinion.  Enough of that though, on to the modeling.

I've started on the North Battery.  The entire structure is a mixture of Thomas By-Product Coke in Alabama, and By-Product Coke Co. here in Chicago.  The major Thomas parts are the ovens themselves.  Thomas at one time had an East and a West battery.  The East was about 36 doors (it's gone, but the foundation is still there, along with what I call the equipment room (for lack of a better definition), so the 36 is a guess.  The West was about 50-54 doors.  It's still there, but I've never taken the time to count them.  It's an estimate.  My South battery is the West at Thomas, with three Walthers kits providing 54 doors in total.  The North battery is the East end at Thomas.  The most important part of this battery to me is the equipment room.  Unfortunately, HAER didn't take any photos of it, so the only image I've been able to get is by downloading a .tif of the areal view, and then zooming in and taking a screen shot.  Even though it's not very clear, you can see the basic details.  The columns are the fabricated type, and there are clearly doors and windows, including a door in the foundation level of the battery's end.  And there is clearly a stairway to the charging platform above.  I like this feature, as it's cut into the platform, rather than aside it.  I think it's an interesting feature.  You can also see one stop left from the tracks for the charging machine.  I've been curious if this wasn't perhaps a maintenance shop for the charging machine.  Who knows?  I'm sure grateful it didn't get demolished as well.  I do know that the East battery didn't last past the 1940's or early 50's.  And that it was the original battery at Thomas Steel.  The West battery came later.  I'd also love to know why they demolished it and didn't rebuild or just overhaul it. 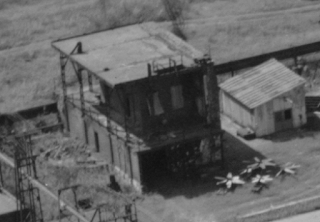 I made the decision to divide these two kits with a brick section.  I still need to cut a door into it.  I've seen a few photos of batteries built like this, where every so many doors there would be a division.  I'm not sure why they did this, but I thought it would add separation to the look of the North and South batteries, and further give the viewer the suggestion that the North battery was much older construction. 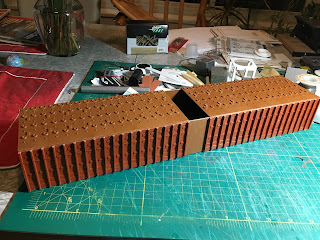 I couldn't help but mock up the entire battery to see what it would look like.  It's about 80" long.  Massive.  Which is just what I wanted it to look like.  All of these facilities were massive.  I'd like the people visiting the layout to have an idea on just how big a coke plant really was. 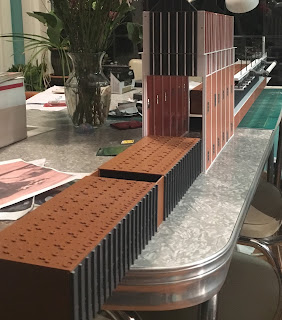 Next came the new platforms and foundations.  I cut the platform from a single piece of 0.060 styrene.   This differs from the South battery, where I used sections from the individual kits.  This was much easier and very clean.  It's also stronger construction.  The foundation sides I did join from the kits, as they were already the right height, and I saw no reason to waste new styrene just to make something I was going to sheath in brick sheet anyway.  I left the beveled edges on the Walthers parts, and joined them with some 0.100 x 0.100 strip stock.  This used the entire surface Walthers meant for gluing on the parts, and allowed them to be grafted together.  A very strong joint. Next came building the equipment room.  I can only see two sides in the HAER photo, so I had to guess on what was on the third side.  I decided that if it was a repair shop or an equipment room, it would likely need some big doors to get parts in and out. This is a re-purposed Walthers Modular fright door.  I think it worked out well.  The doors and windows are Tichy parts.  And the fabricated columns are Central Valley girders.  I think the look very much like the ones in the photo. 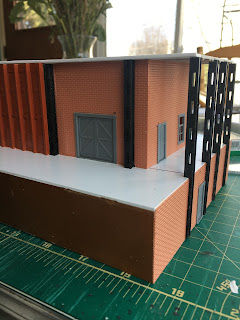 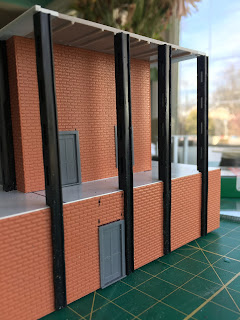 The concrete platform above was made from a Walthers kit part, from under the coal hopper. I filled the sides in with 0.060 stock, and sanded smooth.  Then cut in the stairwell.  Here you can see me experimenting with concrete colors.  This is Gunship Grey Acrylic and Aged Concrete Acrylic from Testors, wet mixed on the part. I think it's a nice result, but I'm not convinced yet.  Concrete at a battery is usually pretty trashed and dark.  With the weathering I did later, I think it came out OK.  I'd like to hear from someone that actually worked on a battery, and hear their opinion of it. 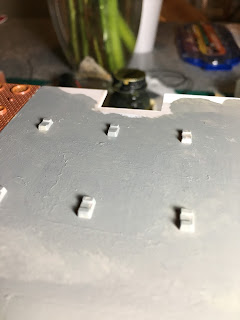 I painted up some detail parts for the side of the equipment room.  Junk like this is a great detail to add to your model.  I hope to release these soon as detail parts in a line of them I hope to create. 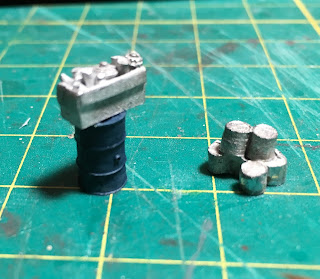 I also added on of my SMMS goose neck lamps over the freight door.  I was careful to make sure it wouldn't interfere with the guide car if it was to be pushed down this far.  There is also a hanging lamp over the end platform.  Eventually I'll add a goose neck over the door on the end, but it would risk damage now, so I'll add it toward the end of the build.  Roberts Brick Mortar is used for mortar, and a blend of inks to age the mortar and weather the bricks and concrete. 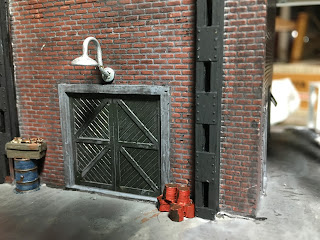 I've added Tichy rivet plates and knee braces to the end columns, which can also be seen in the HAER image. 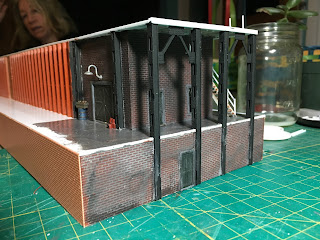