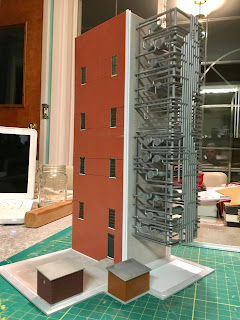 I noticed that he had three main I-Beams under the lowest platform, and they were equidistant.  If you look at the refinery piping, it has four pipes that end at what is now the bottom.  On Dean's version, these not only don't go anywhere, they end into one of those I-Beams.  I decided I didn't want that in this one (my second build of this structure inspired by Dean).  I want to make pipe connections, and as I'll be adding a rectifying column (which is meant to connect to the piping seen here) and some other columns,  Why not offset one of the beams, and allow the pipes to pass through the floor?  So I cut a pass through in the platform decking, and offset the center beam.  I also wondered if there wasn't some reference as to how I-Beams and H-Columns are joined, on the Internet.  A quick search through Google Images yielded this link:

It's awesome.  the lecture shows many diagrams of various ways beams and columns are connected in the real world.  And it's not much more work to make the model connections the same as in prototype practice. I've also added a .060 x .080 bar stock above the H-Beams at the edge of the decking material. This will be used for the base rail for the stanchions for the hand rails.  You may or may not notice that I've left this feature off of the East side of the platforms for now, as I'll more than likely add a stair tower with walkways meeting both the platforms seen here, and the platforms on the rectifying tower. It's totally unnecessary, but will add a ton of interest to the model. 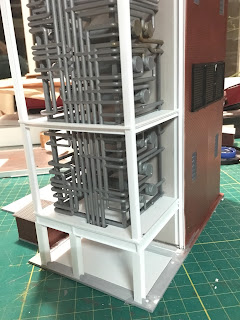 Not pictured, or not easily visible I should say, is that I painted the brick.  And then tried about three techniques for adding motar.  Brick work just doesn't look right without motar in my opinion.  And it was frustrating trying to get the wash to wet into the motar joints on the JT Plastics brick sheet.  It just wasn't happening.  So I put out a plea for help on the Steel Mill Modeling page on FB, and quickly got an answer.  I was recommended to give Roberts Brick Motar a try.  So I've ordered some, and we'll give it a go this week.  I can't do anything with the rectifying columns without getting the motar detail in on the East wall.  So, hopefully it works like everyone says it will.