I haven't made a post in over a month.  Life, my job, and racing has occupied my time.  I was modeling some, but I didn't think anything was worthy of making a post.  As it was either detail work, or superstructure work.  But in the past two days, I did a "push" on the plant. It needs to get done, as I've started to lay track on the layout, and I need to build some other parts of the plant to continue on some of the other structures.  And I don't want the Pyridine Plant to languish.  With the superstructure built for the "meat and potatoes" of an actual pyridine plant, I was ready to build all the appliances. Remember, this plant is part tribute to Dean Freytag, and partially my own OCD telling me it needs to be as realistic as possible. Below is a condenser for the Dehydration and Fractional Distillation portions of the plant. I have no idea what a real one looks like. Photos of actual pyridine plants are few and far between.  So I looked around the Internet on Google Images, and I had seen several that look similar.  It's on the second tier of the superstructure, and behind the Stills, so I thought this was good enough.  It's made from parts bin left overs of the oven from the Walthers Refinery.  I scratch built the vent assembly. 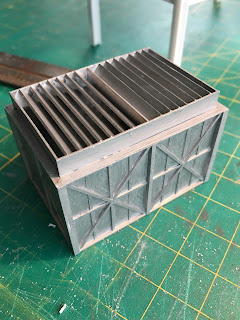 Below is the Ammonia Condenser that leads from the Neutralizer tank to the Wet Base Tank.  This one is a mimic of a prototype I found on Google Images.  I couldn't see the top in the photos, so I ad-libbed with the fans. The piping is fairly correct though. 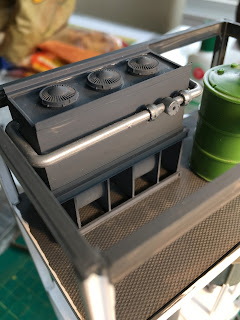 Here is an over all shot of the superstructure as it sits tonight.  You can see the two Stills (lower left), the Wet Base Tank (large tank on the lower tier), Decanters for Dehydration and Fractional Distillation (second tier, right), Ammonia Condenser (upper tier, left), and Neutralizer Tank (upper tier, right). I've started on the railings as well. I should have those done tomorrow night. 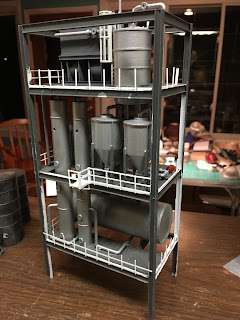 Below you can see the assorted tanks and decanters.  The pump (red motor) is for pumping the Ammonia solution from the Neutralizer tank back up to the Ammonia Condenser.  You can also see the Condenser on the second tier at the right for the Dehydration and Fractional Distillation process. 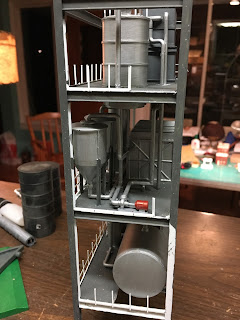 Rear view.  This  side will be up against the plant building (brick structure from previous posts).  So get a good look, as this shot will not be possible once the super structure is glued to the base plate. 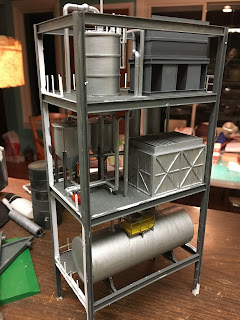 South end of the super structure. 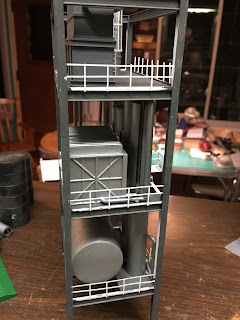 Below is the top view of the upper tier.  You'll notice the valve handles aren't in place yet.  The one on the Neutralizer Tank will be a standard wheel.  But on the Ammonia Condenser I'll use a chain fall wheel.  I didn't want to build a platform here, and it's too high for a man to reach.  Not sure if I'll use wire here to simulate wire rope, or actual chain.  When it's on the layout, I think you'll not be able to easily see the chain, so it'd be a waste of money to use it. 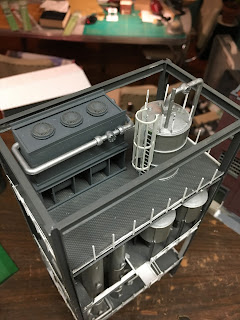 Here's the super structure mocked in place.  Hopefully I can glue it down tomorrow night.  There a train show this weekend, and I'm manning the Steel Mill Modelers SIG table.  And I'd like to display it maybe. 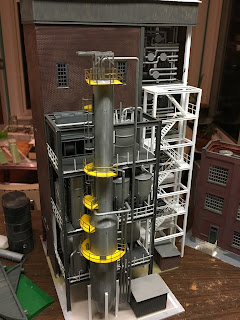 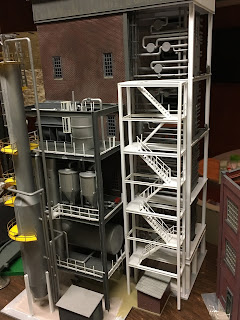