About a year ago, while reading James Mussers' blog, STEEL INDUSTRY, RAILROADS, AND MORE - MODEL AND REAL, I happened upon his entries on a Primary Cooler he found.  Much like many others, he was using Thomas By-Product Coke Works as a resource for his coke works.  But, like many, wanted to make it somewhat different.  So he had done some research and was using plants from other works, and mixing them in.  This type of Primary Cooler, according to James' research, was built prior to WWII, but used up into the 1980's.

After reading all the posts, I knew it was a model I'd have to build.  It's completely fascinating, and it has all the elements that any heavy industry scratch builder would want to build. Below is the photo from James' blog showing the prototype cooler. 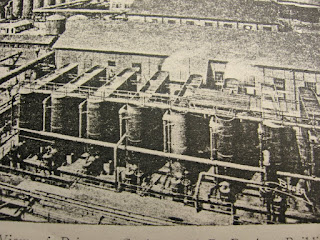 Since the Works at Prairie Scale has plenty of room, I decide to only compress the one I'm building to 6 cooling towers. I also decided that I'd manufacture a "kit" for building the cooling towers.  It made more sense as I'd need six of everything.

The building is a basic structure.  I laid out the brick front wall first.  The back wall matches, but only has one window and one door.  As it faces the backdrop, I figured the only time anyone will see it is if we do a "layout ride-along" with a GoPro.  Then two end walls have two windows each. Tichy doors and windows were used.  Their products are first rate, and fit very well.  Take care when you're laying out your window openings on brick.  Pay close attention to the mortar lines. 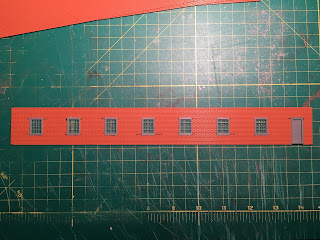 The basic structure is a rectangle, with a similar top, with exception that the top has a longer front to rear dimension. This is because there is a walkway on either end of the coolers for access to the valves, etc. 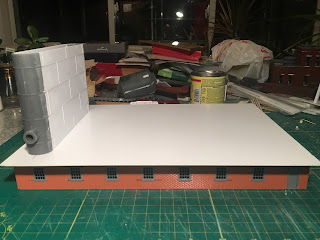 After drawing up the prototype for the cooler ends, I printed a pair out.  The rear is the discharge, and is at the top of the cooling tower.  The kit ends are designed to use 0.060 styrene sheet for the sides, and 0.010 x 0.030 Evergreen strip to make the plate seams.  The process for each tower takes me three days since I'm only working one to two hours an evening, and I like to let the ACC glue set up overnight.  I know it's "fast acting" and all, but I like to let it completely cure.  Styrene isn't overly affectionate to ACC, so I think waiting lets the bond completely set up. I also rough up the joining surface with some 150 grit sand paper, and then wash the stryene off with hot water and let it completely dry before gluing.  The sanding gives more surface area for the ACC. The following evening, I add Tamaya putty to the resin to styrene seams.  As much as I would like it, the seams never seem to be perfect.  So Then let the putty set up, and sand the next evening. 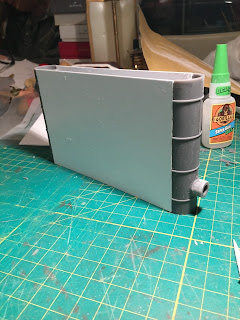 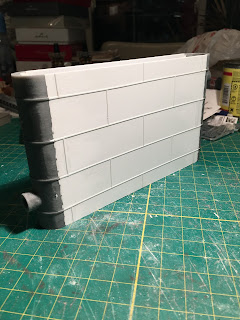 Here's a test fit of the prototype ground control gate valve on the #1 cooling tower.  The original used Web Truss in between the towers.  But I thought I'd change it up a bit and use Central Valley open girders between.  I like the rivet detail, and the oval openings add to the character. 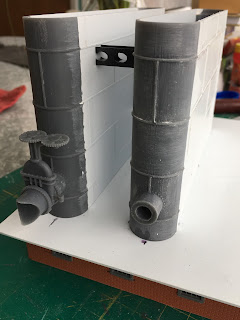 Two production valves installed with the ground controls. 0.039 brass wire is used, 3/32 Evergreen tubing, and (from the parts bin) some Athearn brake wheels that I have from a lot purchase of another guys cast offs.  I drilled the 3/32 for the Athearn brake wheel shaft, glued the two together and let them cure.  Then drilled the center of the brake wheel out for the 0.039 brass wire.  Of course, buying brake wheels that are meant to use a brass wire would be easier.  But I had these on hand, and the extra work wasn't much. 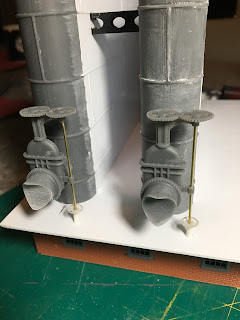 Here's what they will look like with the pipe from the down comer installed.  I won't install it yet, until I have the other four cooling towers built.  I like the result so far though. Stay tuned. 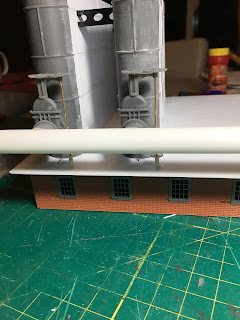