I finished up the overhead crane this evening by painting all the additions, and then weathering it like it the kind of service it sees.  Infrequent.  This crane serves a team track.  So I'm guessing some weeks it might get used once a week, and others three days in a row, and some it would just sit for a few weeks.  In between, I'm guessing that the crane way rails that got a mild polishing from the three days in a row, then got rained on and became a nice, bright orange for a few days. 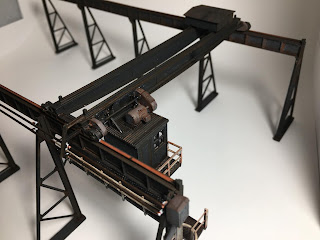 As you can see, the maintenance crew hasn't been by in years to touch up the white safety railings and cage ladder.  I'm not sure if I read it somewhere, or someone mentioned it to me, but, before safety railings were mandated yellow, most were white. And since out layout is 1955-ish, white it is.  The electrical gear I thought about painting green.  That horrid, light-ish olive that a ton of industrial stuff seems to get painted, but gunship gray won the day.  And then a healthy amount of rain, cinder dust, dirt and rust. 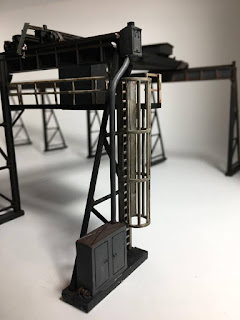 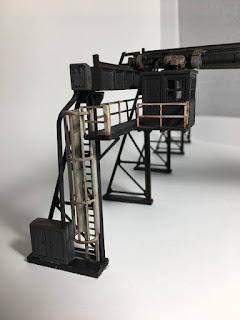 I'll come back at a later date and add some oily black and grease to the drive shaft couplers.  I thought I had some, but alas, nothing in the paint box. All of the joint plates, rivets, and overlapping steel got a double dose of Vallejo Wash Rust. The rusty crane way rail tops are a result of leaving the grey kit plastic alone, and then coating it with a healthy amount of the Vallejo Rust wash. This was a fun project.  Although I started with an already assembled crane, fixing it and then adding the details was still enjoyable. I'll add some work lamps to the area at some point. 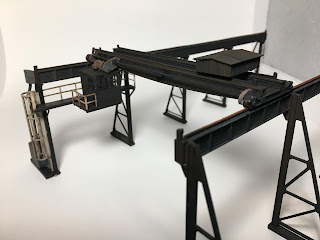