In part 2 of the coke bunker / coal service facility, I've enlarged the coal hopper to extend over two tracks.  So the structure is now divided into two spots for coal in, and three for coke loading.  The coal is delivered on two track, into two separate track hoppers.  These hoppers are jointed to the vertical conveyor via underground augers.   With the size of the North and South batteries, and thinking about the whole operation, I felt that having two track hoppers and a larger coal hopper above made sense. Again, the coal hopper is left over from the coke works kits bunkers and crusher building.  You can see on the right where I've outlined a proposed location for the conveyor from the coke screening building. The conveyor to the transfer house from the coal hopper is center left on the bottom beam. 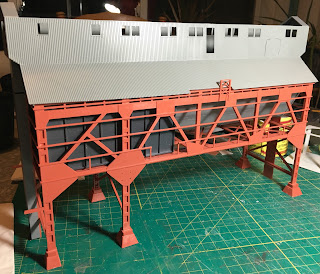 The track hoppers are comprised of two of the track hopper castings from the coke works kits. I simply measured my center to center on the inside rails of the coal service tracks on the layout, then went home and went to work. 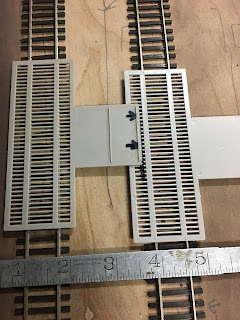 Not much reason to go into gory details here.  The two machinery sheds are scraps from my corrugated siding box.  I didn't over think these.  Simple in design as they would likely be on a prototype.  And I just scratch built the doors.  I didn't see much reason in using some Tichy doors on something like this.  The thought crossed my mind, but in the end common sense won the day.  I felt the shed at the vertical conveyor would like be larger to service the return for it as well.  I'll likely print out a nice big electric motor to put on the back side of the left shed to power the vertical conveyor. 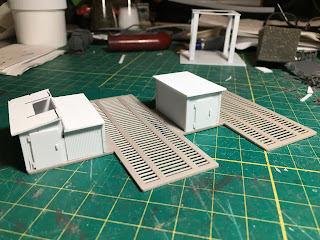 I added actual hopper bins underneath.  I'll have to cut into the benchwork decking, but I felt it would add depth to the scene, whereas most of these if you look down into the grate, the benchwork deck is right there, just painted black.  I'll give these a healthy coat of black, and the sheds some dull grey, and weather the devil out of them.  The structure above will get some shields on either side of both track hoppers.  The 3 blast furnaces at the mill will be plenty hungry, so we need all the coal going into the conveyor and none being wasted. 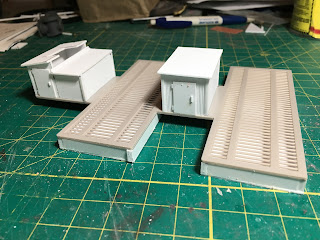 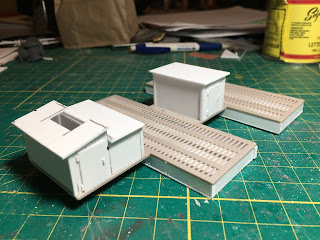