In this installment of "let's build a giant coke battery," I added the edging that is usually on brick structures where the brick or concrete is used as a walkway or platform. I also started on the door repair shop, as well as designed the catenary poles that service the charging car and coke guide car / locomotive.  This is at the South end of the battery, on the extension that was added in installment #2. In the photo below, you can see the edging for the brick battery tops.  It's 1/16" Evergreen angle.  If you do this, take your time testing and making the joints between the angle stock. If you do, you can then sand the joint lightly and make it seamless.  Obviously in real life, there would be a weld joint between say, 20' long sections of angle. But in HO, the weld would be so small you'd never really see it. I'd also suggest making the joints offset from the joints in the Walthers battery tops.  It'll make the whole assembly stronger, and less susceptible in the future to cracking.  The Canentary poles I manufacture are designed to glue to the top of the columns that separate the oven doors, as well as to the edging (or the edge of the battery top if you don't use edging.)

The Catenary poles are designed to use a 0.040" brass wire for the coductor.  But at Thomas they actually used angle iron.  If someone selected not to use the wire, they could easily sand off the saddle for the wire, and glue the angle stock to the same extension. It's really all how you want your model to look.  I'm sure both were prototype. I would use Evergreen 291 if going with the angle. I'm pretty sure that's what my plan is. But I'm months away from adding the poles to my model.  I plan on doing this just about last, as I'd likely end up breaking some off handling it when building all the other stuff. 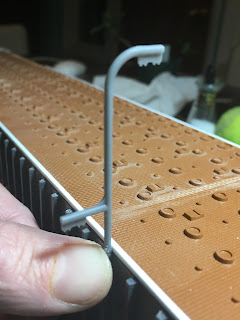 Here's an image of Thomas.  The slots in the angle were to allow for expansion. 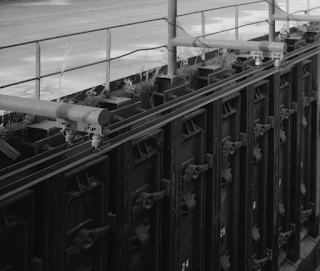 Next is the construction of the extension at the end of the battery, which is over the door repair shop.  Since I'm using 5 of the Walthers kits, I had plenty of spare extension tops.  On the Walthers kit, there is JUST enough room for the charging car to move off of the last oven.  At the Thomas plant, there was more than enough room.  I'd have to believe this is prototype.  I don't have any photos of Thomas when the East end battery was still in place, but I almost wonder with just under 100 ovens if they didn't have more than one charging car.  Eventually they would need some kind of maintenance, and being able to move one completely off of the battery, you could use the other while #1 was down.  It's something I plan to do regardless.  South battery is 58 ovens, and North battery will be 36, so I think two charging cars makes sense. 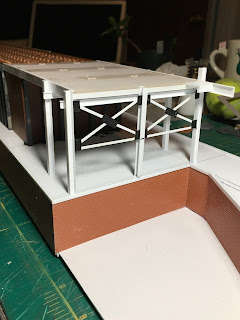 The basis for the door repair shop is Thomas also, and at some point the shop crew erected a wall at the end of the shop, out of corrugated sheet, and installed some doors.  At Thomas, this was because the shop faced West.  And I'm guessing the Alabama Sun just beat down on the shop crew in the hot Southern Summers.  It's a neat feature, and I added it to mine.  Mine would face South, but being in Indiana, the problem would be the same. 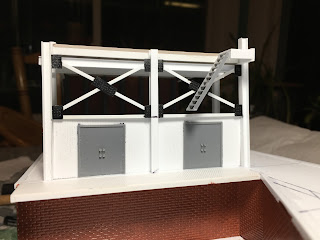 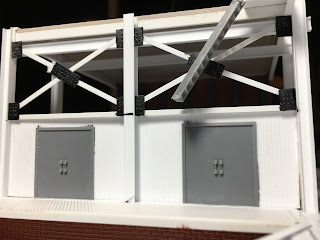 After fabricating the wall and gluing it in place I went to bed.  Like I do every modeling session because I'm using modeling in the evening once the house is quiet.  The next day I went to work, and was going along at a good clip, and it suddenly dawned on me. I glued the wall in the end of the shop extension, where it should have been at the next set of pillars back from the end.  The last section of the extension was for the spare door machines.  Thomas kept two spare door machines that could be swapped with the ones on the pusher and coke guide engine.  These are pretty big pieces of equipment.  And they had an small over head crane to assist with swapping them and storing them.  Modeling in the late evening when you're a bit tired can help you make mistakes.  Luckily I was able to use a knife and separate the glue joints and move the wall back and not have to fabricate a new one.  Below is the image of the door machine storage and door repair shop.  Lots of details going on here.  Note the Cantenary poles. 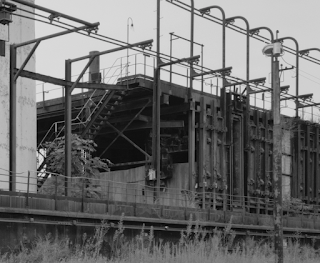 Last, I've started installing the spare door storage, as well as the door tiling tables.  Thomas used a sort of tilting lift assembly to place a door on that needed repairs, then tilted it down into the shop so it was flat for the crew to work on at ground level, rather than up on scaffolding. 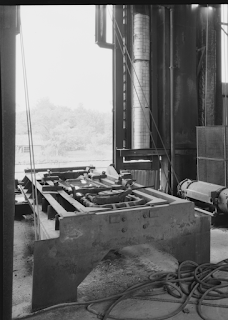 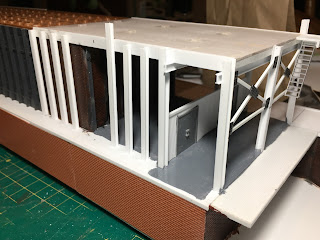