It's been awhile since I last worked on the Coke Battery.  I basically just wanted the shape so I could mock it up and figure out the track plan for the layout.  That done, I noticed even thought the battery was 54 doors (3 Walthers kits) it still looked tiny in the 25 feet of space on the layout. So I made the decision to model Thomas (with a few modifications) as it was in the 50's.  That meant the extension for the door repair shop, the "parking" for the guide and engine, spare guide, the coal bunker and associated shops and equipment rooms below it, and the additional 36 door battery on the other side of the bunker.  All told, it's something on the order of 6 1/2 feet of battery.  I also decided that I didn't much care for the concrete sides on the foundation.  Somewhere I have a photo of a battery where the foundations were brick.  Going back to the Coke Works is a facility from the 1920's or earlier, and both labor and brick being inexpensive at that time, I decided to back date the kits and sheath the entire foundation in brick.  This is one of those times I wish I could purchase brick sheet in something much larger than 6"x12".  Making the joints was a bit of a pain, but the results are pretty good.  Getting them to be a tight joint, and the mortar lines aligned is the trick.  Once done, I lightly sand the brick tops with 400gr. sand paper, and then use a razor saw to "cut" in the mortar lines though the glue filled joint.  the result is pretty good.  Another option I'm exploring is the electrical service tunnels that were in these foundation. One of the members on the FB Steel Mill Modeling page that worked at a coke works said that there were two of these tunnels from one side to the other at the battery he worked at, and they were about at the 1/3 and 2/3 locations on the foundation.  Right where my joints are. So that would be a neat feature, and a good way to get rid of the joints all together. 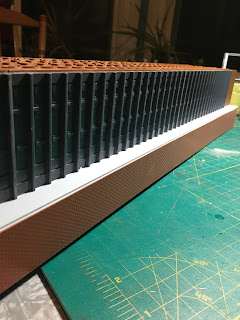 A new base was cut from the 36" x 36" x 0.060" styrene sheet I sell.  This was great, as it let me make one continuous base plate for the 54 door battery and the door repair shop (not yet built) and the extension where the spare coke guide and door machine/coke guide engine sit when not in service. 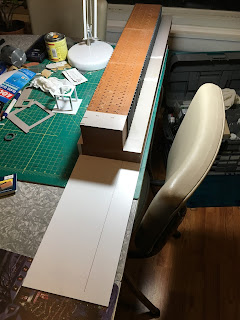 Extension for the spare coke guide and door machine/coke guide engine, and brick foundation sheathing applied. This is the "south" end of the battery. 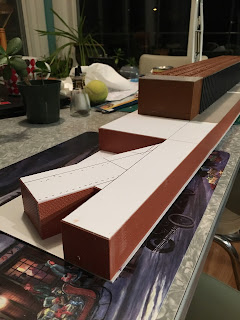 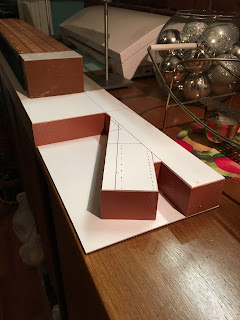 You can see the layout of the battery facility in this image.  I'm working on the section that is in the lower left corner. 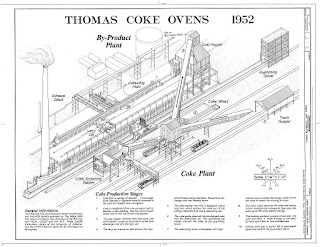 You can see in this image the door machine and a coke guide car. You can also see the door repair shop at the right.  There's a brick division between the end of the battery ovens and the repair shop.  You might also notice that the door machine isn't sitting on concrete, but steel.  There was storage under this part of the track.  As there are no doors or windows on this side of that section, I decided not to put any in on the other side. That side of the battery will face the back drop on the layout, and once placed, never be seen from any vantage point.  I did however, brick the foundation on that side, as we have a camera train on the layout, and if we run a train behind the battery, you'll be able to see the entire side of that battery.  So a lack of brick on the foundation would be an obvious indiscretion on the model in a video.

As an aside, the below image is a .TIF file.  When you download images from HAER, be sure to download the .TIF option.  You can zoom in extremely close on this type of image, and it remains clear.  Often revealing detail you'd not see in a .JPG. 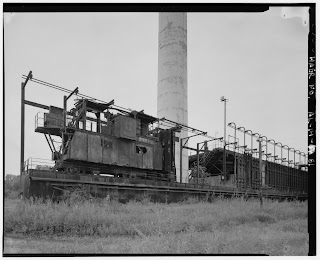