Well, it's been almost two weeks since I made a post. Work and life and a holiday got in the way.  But that's how things go I guess.  I've started in on the By Product Plant building.  This will be a large undertaking, both literally and figuratively.  The model building is 26" long and 10" wide.  I have the shell finally done.  I chose Walthers Modulars for this building, as they were the closest pre-fab kit I could find to the original design.  As I'm not modeling the prototype exactly, I didn't mind the windows being slightly different. I at least go the roof pitch close, and the overall layout of the walls close. I did add one overhead door, thinking it would allow viewing of the exhauster engines.  But, the overheads are on the backdrop side of the building, so that doesn't matter I guess.  The basic building is now built, and I can get it on a base plate.  Several of the large tanks will go on this base plate as well, and attach to this building.  So the base plate will be quite large. 26 x 16 I think. 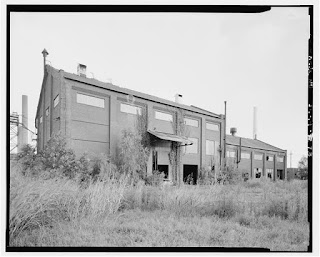 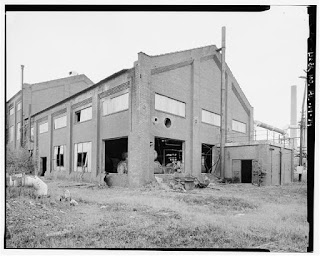 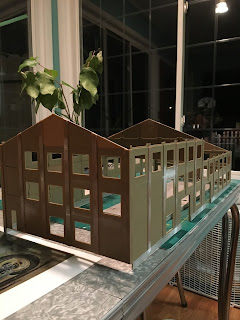 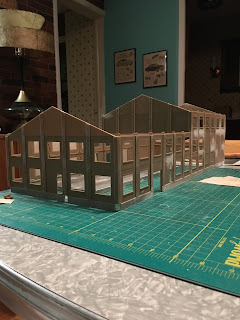 Posted by Unknown at 8:20 PM No comments:

More work done tonight on the Benzol plant.  I cut the baseplate out of 0.060 sheet, and secured the tin building and the agitator tower.  This allowed me to finish the railings on the top deck.  I also started adding the windows to the rectifier building in preparation to secure it as well.  Just about done with the fabrication, and can move on to final painting and weathering.  This was fun to build, but man was it a ton of hours. 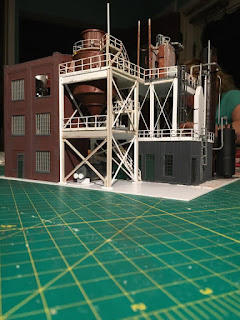 Posted by Unknown at 8:21 PM No comments:

Started in on the By Product plant tonight. And I've discovered, much like everyone else on the internet, that I have plenty of wall panels, and not enough Columns and Caps. If anyone has 2 extra of Walthers P#933-3725, and also 1 of Walthers P# 933-3724, I could sure use them. I kept researching what to use to build this building. The Walthers Modulars won out over City Classics, but I hate how the parts fit together. As you stack the walls, it seems a bit random on how they fill fit. And I'm pretty careful about cutting them from the sprues and removing waste. And yet, they still fit poorly. I think I'm going to glue styrene strip at the joint where one floor meets the one above, and paint that concrete. I'm sure I've seen a building with this type of detail, but I don't remember where. I was hoping to have the shell done for Wednesday nights track planning meeting, but alas, no bueno. I've got to figure out how to make the tops of the end walls as well, as the Walthers peaked roof ends only span two virtical wall sections. And the end walls will be five wide. Never a dull moment for the scratch builder. I probably should have gone with DPM. You can still get all that stuff, and they give you pillasters and corners with each kit. 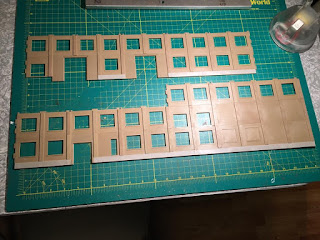 Posted by Unknown at 5:37 AM No comments: 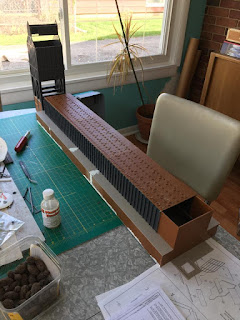 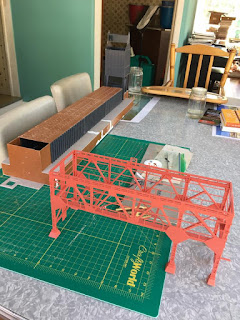 Posted by Unknown at 4:05 PM No comments:

I deviated from my plan to finish the Benzol Plant this weekend, and started in on the coke bunker / coal service facility. I didn't want to do it.  Really.  But it was nice to take a break from the tedious railings and piping on the Benzol plant.  I constructed a new bunker at the end that used to be for ash/cinder loading.  I used one of the four bunkers left over from the other two coke batteries. I'm going to superdetail this, just like the rest of the works.  So getting to this stage allows me to start planning. Next I'm going to install exterior bracing on the verticle conveyor for the coal, and cut in the opening for the conveyor that will run to the transfer house.  I've already got most of the walkways and railings and stairs planned out.  I'm not going to use any of them from the IHC kit. They are all pretty bulky, and aren't very well planned out for the area I have to put this in. 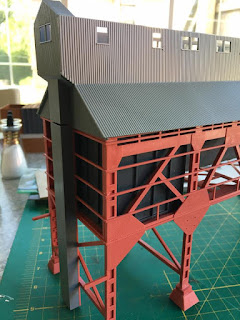 Posted by Unknown at 3:58 PM No comments:

The Benzol Plant is finally nearing completion.  I've got over 70 hours in this facility.  And it's 12" x 14" in size.  Crazy.  I think this it probably the most complicated stratchbuilding project I have done to date. But it's been fun.  I've learned a ton about the process of how these chemicals are made though. And even made some friends along the way.  And any project that results in fellowship and learning is worth doing.

I have the Coke Ovens partially started. But I'm on the fence about doing it next, or perhaps the By-Product Plant building.  Or maybe the Final Cooler and Benzol Washers.  Who knows. I'll probably flip a coin.  This next Wednesday, we'll be having a track planning meeting at the club, and hopefully it will involve the track plan for the Coke Works.  I need to take an evening off from modeling and get the card stock footprints for each of the major buildings made for the planning meeting. Nothing like having full size footprints to play with for "packaging" the industry in the space provided. 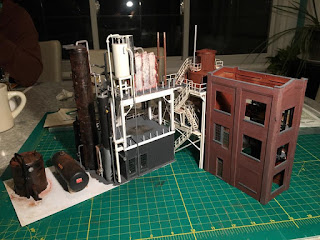 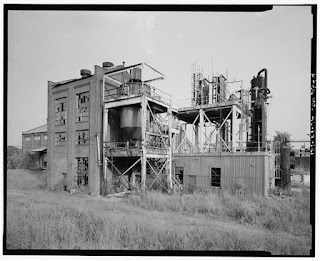 Posted by Unknown at 8:45 PM No comments:

Not an overly glamours post this evening, but progress is progress.  Got the decking laid for where the By Product Coke Works will go.  Trimmed and screwed down, it's ready for the next phase, track planning a "packaging" of all the buildings.  Time to make some posterboard footprints of each part of the plant. 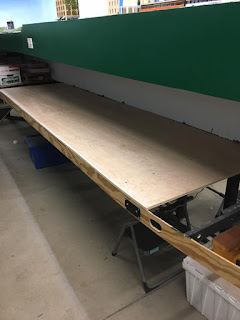 Posted by Unknown at 9:17 PM No comments:

My first official post about the modeling I'm doing.  And it's mostly done. I'm constructing a By-Product Coke Works for the club layout. The space on the layout is about 10' x 30" wide.  And a double track mainline has to pass by on one side or the other. Likely the front side, so that switching and passing trains aren't a problem.  Especially if something derails.  It's not a good idea to have people leaning over super detailed buildings to re-rail a piece of rolling stock.

The works is not based on any one prototype works, but a conglomeration of several.  Namely, Thomas By-Product in Alabama and some freelance using prototype buildings as a basis.  Thomas will be used as the "erecting diagram" to layout all the necessary buildings and piping. Without following the exact footprint.  The space on the layout isn't wide and short, like Thomas.  Rather, long and narrow.  So some creative piping and "packaging" of the buildings is in order.

I chose the Benzol plant to model first.  I could easily start a bunch of the structures at one time, and bounce from one to another as interest leads me. But I find that doesn't make a productive method.  As well as our new house is smaller, and I'm basically modeling at my grandmothers inherited kitchen table.  So I don't have the storage room for several structures to lay dormant while I'll work on one and not the others.  The Benzol plant is one of two of the most complecated of the parts of a By-Product plant.  Compact but litered with piping and walkways.  The other being the Primary Coolers and Tar Precipitators. I won't tackle that one next. But probably before Christmas.

This is one of three structures that comprise the Benzol Plant.  Presumably the tin building is some kind of equipment room / store building. And also serves as the base for two platforms housing the Final Cooler, Vapor to Oil Heat Exchanger, and Light Oil Condensors.  Which are all tied into several tanks and columns. I've got about 50 hours in this so far, and it's just about done. I've actually started painting and weathering the facility.  A good portion of the columns and tanks aren't an exact match for what's at Thomas. The important thing to know about this project is that most of the parts are all kit's, unbuilt, partially built, or just left overs, that have been donated to the club over the years and were just laying around in various boxes.  I decided it would be fun to "scrap bin" engineer as much of both the By-Product plant, and Steel Mill as I could with what was at the club. Only adding Plastruct, Evergreen, Etc. where necessary. I'm an avid kit-basher and scratch builder. So this mindset seemed filled with fun. And it has been.  I'm sure not two of these plants were the same Nationwide.  So deviating from Thomas prototype and still seeming prototypical and to scale is completely possible. 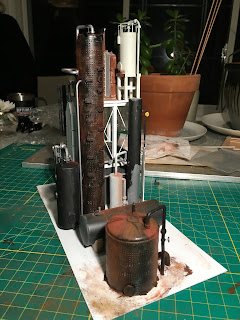 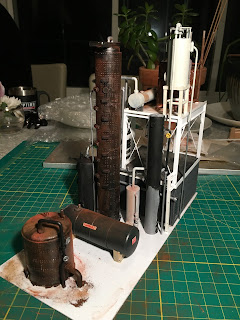 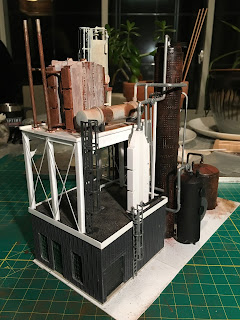 Posted by Unknown at 8:21 AM No comments:

My journey into Steel Mill Modeling

So, here we are.  And, if you're reading this, you're wondering what all this is about.  The title is obvious.  But what is this journey?  Well, at the ripe age of 46 I find myself the newly elected VP of the Prairie Scale Model Raiload club.  And, seemingly, in charge of a 10' section of the layout where a By-Product Coke Works is going, an 8' (-ish) section that will be pier for unloading ore ships, and a 45' section where an integrated steel mill will go.  Sounds like a ton of modeling for one guy, right?  Well, it might be.  But I see years of fun, learning, and modeling ahead.  I'm not tied to one small scene or building, and then I'm done.  There are dozens of large structures to be built.  Some of which there aren't kits to support.  So I get to scratch build them.  One of my favorite tasks.  And there is much to learn.

In 1994, when I became interested in this genre called Steel Mill Modeling, there were only a few articles in magazines, and a book.  Newly released by Walthers, and writen by my (newfound) friend Dean Freytag.  Not much internet then.  So, you had to have the magazines (if you could find them), and the book, and maybe access to a mill to get photos.  Now the internet is alive with resources.  HAER, the Steel Mill Modeling FB page, the NMRA Steel Mill Modelers SIG, and so much more.

My blog will cronical my journey.  And my learning.  And hopefully help you or inspire you or both.  Enjoy.
Posted by Unknown at 6:39 PM No comments: