I worked more on the Coke Bunker / Coal Service structure this weekend.  I looked at the works over the weekend at the clubs open house, and decided I need to finish this structure.  The fact that coal is delivered here, and coke is loaded here have a huge impact on the coke screening building, as well as the transfer house to the coke battery coal bunker.  The design, height, etc., of both of those structures pivots on this structure and the coke battery.  So I need to finish and place this one and the battery, in order to design and build the screening and transfer structures.

The IHC kit is nice, but some of the superstructure is pretty rudimentary.  If I ever built this structure again, I'd likely purchase the kit, and then use only some parts from it.  Or, now that I have one, just scratch build the entire thing.  The H-columns are pretty much nonexistent.  Instead, they look like they would be box tubing in real life. Something a construction company just wouldn't do.  So I decided to at least dress it up some.  I needed to move the beam up about 1/2" that is over the center equipment shack for the inner track hopper. So I just cut it out, and replaced it.  I almost replaced it with an I-beam, but then the others in the two outer leg sets wouldn't match. So, in the end, I just used square stock that I had that was close enough to what was on the IHC castings. Tichy p#8261 Assorted Rivet Plates were added to the joints.  I'm not sure why, but IHC covered the rest of the structure with appropriate rivet plates, but not the end leg castings.  This looks much better.  I need to get another package to finish against the back of the vertical conveyor, and inside the end leg pairs. 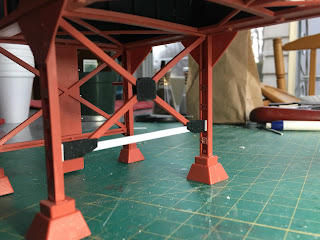 I also rebuilt the West end of the building.  There was another vertical conveyor on that end, and I wasn't going to use it.  The way the IHC kit is made, the inside of the conveyor is cast into the end casting.  So there was no real way to remove it without just rebuilding the center section. The IHC structural members are a goofball size, but they are within thousandths of Evergreen strip sizes. Tichy rivet plates used here as well work great for adding realism as well as making it easy to make the joints.  I can be close with the joints, but not exact, and it's still a strong joint. The only part I didn't remove was the main cross member about midway up.  The leaving from the vertical conveyor casting made a great place to mount an industrial lamp.  All the lamps are live, and ones that I carry in Steel Mill Modelers Supply. 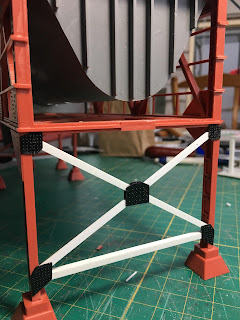 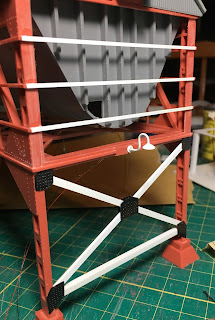 I finished up adding the exterior horizontal bracing to the outside of the vertical conveyor at the coal end. This looks a hundred times better.  I'm not sure why IHC didn't add this detail to the casting to begin with. But it was easy to do.  0.030 x 0.030 Evergreen strip was used here. I decided to match the spacing to the structure horizontal ties for a better look and ease of modeling.  The bracing doesn't go all the way down because the lower portion is inside the track hopper equipment shack.  I'm not sure what I'll do at the seam between the roof section and the lower conveyor housing.  I'm thinking now about using 1/16" angle stock to make a flanged area there. I'll probably add one just above the equipment shack at the bottom as well. 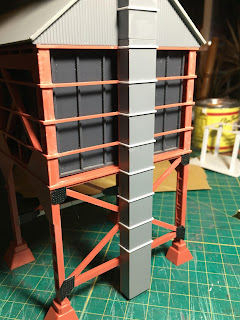 Lastly, I started adding hanging lamps over the area between the tracks.  I don't think I'm going to use the loading chutes that are provided in the IHC kit, as they look really bulky. Something I'm sure no one would really look at when viewing the scene. But Tichy p#8003 just look a ton better.  And the castings aren't so thick that, like the IHC parts, look like they are made from 5" thick plate. And for $10 worth of parts, the overall model will look much better.  Once everything is painted, I'll make certain the lamps are hanging straight. 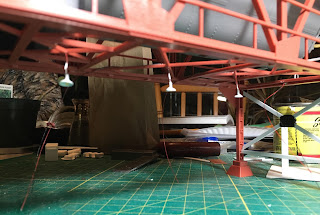