I'm starting on the Pyridine Plant.  What's a Pyridine Plant? It's part of the By-Product Coke Works, and Pyridine is used as a precursor to agrochemicals and pharmaceuticals and is also an important solvent and reagent. Pyridine is added to ethanol to make it unsuitable for drinking (see denatured alcohol). It is used in the in vitro synthesis of DNA,[9] in the synthesis of sulfapyridine (a drug against bacterial and viral infections), antihistaminic drugs tripelennamine and mepyramine, as well as water repellents, bactericides, and herbicides. Some chemical compounds, although not synthesized from pyridine, contain its ring structure. They include B vitamins niacin and pyridoxal, the anti-tuberculosis drug isoniazid, nicotine and other nitrogen-containing plant products.[10] Historically, pyridine was produced from coal tar and as a byproduct of coal gasification. However, increased demand for pyridine resulted in the development of more economical methods of synthesis from acetaldehyde and ammonia, and more than 20,000 tonnes per year are manufactured worldwide.

A modern Pyridine Plant in India: 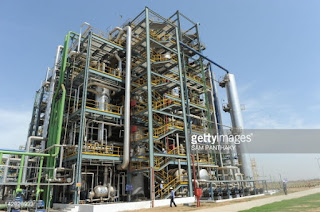 Dean Freytag, I think maybe unknowingly, built one (although very simplified) and it is included in his book from Walthers on Steel Making and Modeling: 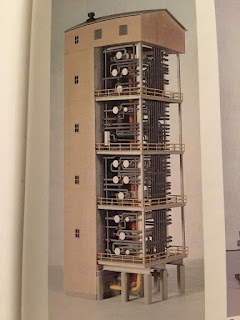 I built a similar one for the Military Society Of Model Railroad Engineers in Alaska as well: 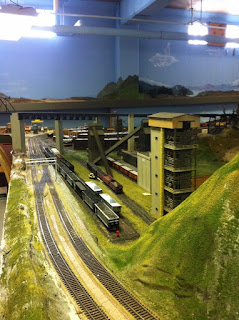 And here's an example of one built by my friend Donald Dunn: 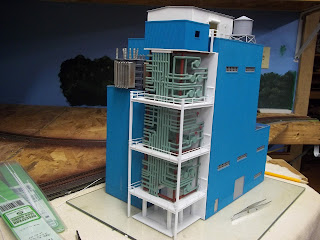 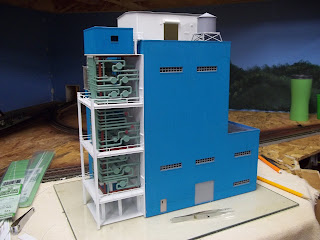 So, for my next one, I'm looking to back date it to 1951.  I could use a corrugated siding again, but I thought it would be fun to do it in brick, like many of the other structures in the Coke Works on our layout. In the East, you see many structures in a coke works or a steel mill that are brick.  Brick was cheap, and so was labor before and after WWII.  And I thought it would lend more of an early feel to the project if it was brick.  I'm using Walthers Cornerstone kit 933-3705 United Petroleum Refinery for this project of course.  As photos of Pyridine Plants are seemingly few and far between, it's a guess what is to be modeled, and where all the pipes go.  Also, I want to pay homage to Dean, who was a "telephone" friend for years, and inspired not only myself, but 1000's of other steel mill modelers.  So I want this new Pyridine Plant to have a look and feel of the original one Dean built. 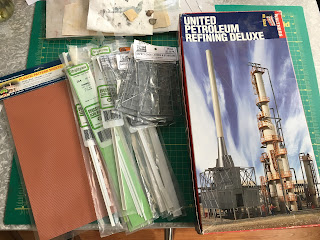 I'm also using a spare base from a Walthers 933-3045 Vulcan Manufacturing kit. The new plant I'm building will include some of the rectifying towers, etc, that you can see in the photo of the one in India.  It'll also give the plant some more "depth" for interesting things to look at.  I know this is a bit of a departure from the Benzol Plant's prototype modeling. But again, it's an homage to Dean and an imagined prototype, not an exact copy.  I wanted to include it in my industry, partly because it adds something most people either don't add, or don't know about, and for Dean.  So it'll be a discussion starter too.  And it generates another load out for operating sessions.  Both my 1951 edition, and the 1964 edition of The Making, Shaping and Treating of Steel show the Pyridine plant in the diagram of a By-Product Coke Works.  Below are photos of the modified base using parts of the base plate from the Refinery. 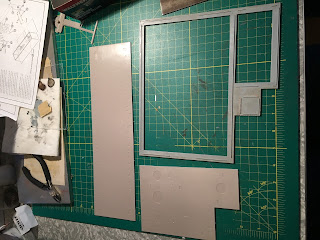 Just need to sand down the filler, add more if needed, and finish sand.  And I'll add some "cracks" in the concrete and light sand again before moving on.  I like sanding "concrete" base plates before doing anything else, as the smooth styrene bases never look like concrete once painted.  Concrete for this type of application is usually rough.  And this should look like that too.  Where the chimney was for the Vulcan Manufacturing, I'm going to add a small pump house that's actually the collecting main valve house from the Coke Oven kit.  And the one I have just happens to fit the registers for the chimney pretty much exactly. 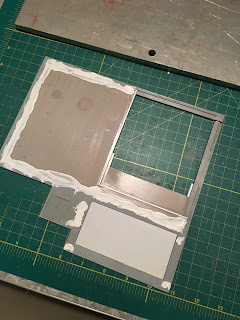