The Making, Shaping & Treating of Steel, and other matters.

I haven't made a blog entry in about two weeks.  Much like anyone reading this I'm sure, family, Summer and work are occupying more of my time lately.  Work for certain.  I travel a bit in the Summer for my work, and that puts a dent in modeling.  I have gotten more done on the Benzol Plant.  It's almost finished, I think.  I say, "I think" because every time I think I'm about done, I notice another detail, or something else that needs painted, etc.  I was experimenting with using Humbrol Acrylic paint for the concrete pad that everything is glued to.  Fail.  I either couldn't get the mixture right, or the paint was old.  I don't see the store I bought it from selling a huge amount of Humbrol anything.  A 30 year old jar of Testors Grey mixed right back up with some BB's added, and was a bit closer to the color I was after.  I also got all the windows in the Rectifier building, as well as the foundation on.  I could probably post a photo of that, but it would seem boring I think.  Windows and a foundation aren't much to look at.

I also picked up a copy of the book below.  It's the 1964 edition.  And it's awesome.  I originally heard of this book when I asked a question on the FB Steel Mill Modeling page, and someone answered and referenced it.  I wondered how much it would be, and so looked around the Internet.  $25. I figured, what could go wrong?  Well, I'm here to tell you, if your modeling Steel Mills, this book is a must have.  I would suggest getting an edition that is closest to the era you're modeling.  They seem to have random issue dates.  But it looks like about twice a decade.  The books earlier than say, 1950, go up steeply in price.  But all are less than $100.  And anything after 1950 seems to be about $25 average.  Packed with flow diagrams for just about everything that goes on in an Integrated Mill.  The Blast Furnace Diagram and the By Product Coke Works diagram were most illuminating.  Also, a diagram for a Portland Cement works.  I had no idea slag was used in making Portland Cement.  Also, how a Sinter Plant works.  The second half of the book is about rolling mills.  A ton of formula's you'll never use, but tons of definitions, diagrams and photographs that will answer just about any question you could have on how to model a mill. 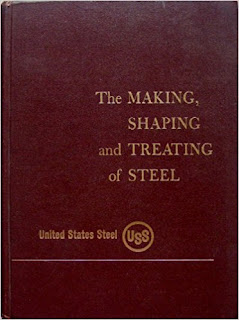